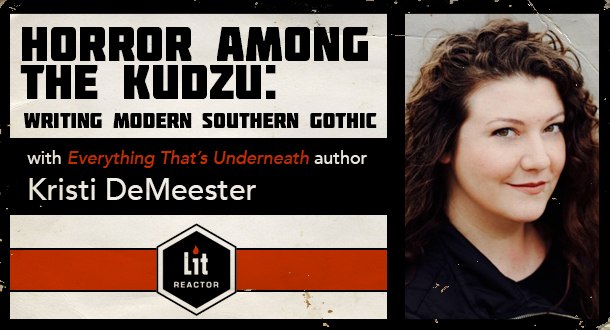 Your Instructor: Kristi DeMeester (author of Everything That's Underneath)

Dig deep into decay, violence, and the grotesque…
….and uncover the unsettling traditions of Southern Gothic literature while learning how to bring those horrors to life in the modern world.

By unraveling the deep-seated threads of fear, the Southern Gothic tradition places us on a path to madness, chaos, and the shadows where our secrets dwell. But even the best-kept secrets, like so much blood, will find their way out. Follow that path into the dark and learn to take traditional Southern Gothic elements and transmute them into modern settings and characters. Together, we’ll examine what classifies a story as Southern Gothic and then discuss how we might transition those elements into the modern world, including how we might use Southern Gothic stories as deeper reflections of society. Once you’ve found the seeds of your story, we’ll work to heighten the intrinsic dread of the Gothic while also weaving in the fecundity and rot hidden under the humidity and Jasmine-scented front porches of the South.

Participants may choose to write either a short story or a section of a novel, or they may opt to use a prepared story or novel section they hope to expand significantly. Each week there will be a short lecture, handouts, readings, and writing assignments that will be critiqued by both the instructor and your fellow classmates. In addition, there will be opportunities for discussion with Kristi and your classmates.

HORROR AMONG THE KUDZU: WRITING THE MODERN SOUTHERN GOTHIC is taught by Kristi DeMeester, a fourteen year veteran teacher and author of the Appalachian folk horror novel BENEATH (2017) and EVERYTHING THAT’S UNDERNEATH (2017), her collection of short fiction. Her stories have appeared in several Best Ofs inclucing Ellen Datlow’s BEST HORROR OF THE YEAR Volumes 9, 11, and 12, YEARS BEST WEIRD FICTION Volumes 1, 3, and 5 in addition to publications such as BLACK STATIC, THE DARK, PSEUDOPOD and several others. Having grown up among the kudzu, Kristi will serve as your guide as we descend together into darkness.

Much of what classifies a story as Gothic is embedded within the setting. Decrepit castles. Ancient, stone dungeons. Crumbling plantations. But while the atmosphere created by the setting is important in creating anxiety within a reader, the characters themselves are often as equally damaged as the places they inhabit. We’ll start our journey here by reading and discussing modern examples of Gothic setting and characters and what makes them not only frightening but also compelling. We’ll then work to brainstorm settings and characters that capture the Southern Gothic traditions in our contemporary world and then begin writing a scene that reveals them.
*There will be a handout and short lecture, suggested reading, and writing assignment for this class.

Much of the chaos and violence that are the hallmarks of a Southern Gothic story come at the hands of what is commonly known as the Grotesque Character. Flannery O’Connor’s memorable character The Misfit, anyone? This week, we’ll study the use of the grotesque as both external deformity and internal malformation. And yes, this includes the supernatural! To begin, we’ll consider what modern elements and characterizations in modern Southern Gothic stories work for an incorporation of the grotesque and how we might develop and use the grotesque in our own stories. Then we’ll continue working on our stories, layering in a modern use of the grotesque that works to go beyond the physical into deeper internal complexities that reveal a malignant core.
*There will be a handout and short lecture, suggested reading, and writing assignment for this class.

Week Three- Violence, Race, and Religion and Dealing With Them Correctly

The South has long needed to confront its grotesque past. We’ll continue to build on last week’s discussion of the grotesque by exploring grotesque histories and how they manifest in social anxieties and sinister, deadly events in Southern Gothic fiction. Particularly, we’ll examine how poverty, alienation, and crime serve discussions related to the South’s problematic history with slavery and racism. Also, we’ll look closely at the role of religion in Southern Gothic tales and consider how hypocrisy, blind faith, and corruption can help to further develop our stories. By now, we’ll have working drafts that are ready for refinement in terms of our Southern Gothic elements, voice, pacing, dialogue, and character development.
*There will be a handout and short lecture, suggested reading, and writing assignment for this class.

Week Four- Insidious Secrets and Who Comes to Harm

For our final week together, we’ll review the elements of a modern Southern Gothic story and discuss what larger commentary our stories might point to. Among the secrets, decay, and violence, our characters will ultimately be irrevocably changed. We’ll consider how and why that change occurs and finalize our stories by leading our characters into the center of those tangled webs and then allowing for that change—even if it is harm. We’ll critique our final pieces, polish them up, and ask any questions that might have lingered or not been answered throughout the session. Ideally, students will have a complete story ready to submit to publications or have a fully realized section of a novel after completion of this session.
*There will be a handout and short lecture, suggested reading, and writing assignment for this class.

Kristi DeMeester is the author of Beneath, a novel published by Word Horde and Everything That's Underneath, a short fiction collection published by Apex Books. Her writing has been included in  Ellen Datlow's The Best Horror of the Year volumes 9, 11,...

"This class was so good I may take it again. Kristi’s lectures were as fun as they were informative, and her feedback—as well as that of my very talented classmates—helped me create two short works l’m really proud of. Highly recommend!" —Rachel S., former student

"Kristi took us on a deep dive into the quivering heart of Southern Gothic with interesting lectures and engaging writing challenges. She's an entertaining and knowledgeable instructor and I thoroughly enjoyed the workshop." —KT Wagner, former student

“In her debut novel  Beneath, DeMeester has sharpened the blade of her literary shovel and unearthed one of the most upsetting and horrifying tomes of dark fiction in recent memory.” —This Is Horror

​Praise for Everything That's Underneath

"A dark, intelligent, relentless collection." —Paul Tremblay, author of A Head Full of Ghosts and Disappearance at Devil's Rock