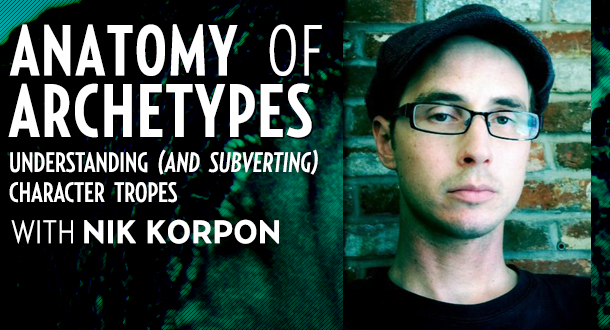 In this two-week class, learn fiction's classic character archetypes—then learn how to subvert those archetypes and make them your own, so you take something old and make it new again.

It doesn’t matter if you’re writing hardboiled crime or urban fantasy, space operas or western ballads: The most inventive plot will crack and disintegrate if there aren’t real and compelling characters supporting it.

These characters, though, are not just arbitrary attributes housed inside a shell. From Luke Skywalker to Phineas Poe to Hamlet, the most memorable figures in literature can be aligned with a character archetype. By studying these archetypes—their characteristics and their place within a plot—we can create characters that readers are able to identify with.

But, will this make the reader follow the characters into Hell? We need to make these characters real, living, bleeding people, and by exploiting the archetypes, by subverting and humanizing them with concise, evocative details, we can create the type of characters that a reader will follow into whatever shadowed alley, extraplanetary prison or damned castle in which their dark fate lies.

This class will focus on genre fiction, which has long been ghettoized by the literati for being formulaic and poorly written. There are several reasons for choosing genre, the least of which is showing why this notion is not accurate.

First, there are as many genres as there are ways to dispose of a body. This is important because each genre has their own tropes and expectations, ones that we will learn to subvert and combine with other genres to create surprising and original tales in a variety of settings.

Second, genre fiction tends to have the most obvious character archetypes, for better or worse, and this will allow us to analyze, deconstruct and rebuild them into more fully-realized people that will work as easily in a noir melodrama as a dystopian western.

Finally, many stories in these genres are fueled by the desire for power or love, an impulse that impacts almost every action in every aspect of society.

To start, you'll examine classic character archetypes from a wide range of genre fiction, and learn how they fit into the narrative arcs of stories. You'll peel back the exterior of characters to look at their emotional arcs and discuss what they share in common—and at the same time, what makes them so unique and enduring.

Writing assignment: Write a story of 2,500 words that utilizes classic character archetypes—but you can't directly relate the character types to the reader. You have to convey them through status and interaction.

This is the heavy-lifting week. You'll take everything we learned the first week and blow it to hell, then pick up the scraps and reassemble them into new and exciting characters. You'll not only look at subverting the archetype expectations, but the specific, telling details that turn a normal character into a real person with real flaws.

Writing assignment: Take your assignment from week one, translate it into a different genre, and subvert two of the established archetypes. You'll also be urged to cut 500 words by using small, telling details that will be discussed in week two.

"The pop culture apocalypse is now, and Nik Korpon is one of its darkest new voices. Stay God mashes up the music, the movies, and the TV of our generation and pours it into a rusty martini shaker. It’s a story about secrets, lies, love, and all of the stuff with which we fill our lives and time. Korpon, with his whiplash noir, is one to watch." —Anthony Neil Smith, author of All the Young Warriors and Hogdoggin'

"Stay God, Nik Korpon’s dark and edgy novel about an ambitious drug dealer in Baltimore, reads like the bastard child of Hubert Selby and Raymond Chandler. In beautifully rendered prose, Korpon delivers an intense story of love and treachery on mean and merciless streets." —Donald Ray Pollock, author of Knockemstiff

“Nik Korpon’s Old Ghosts is about old friends and older dreams getting in the way of your present, and then totally kicking the shit out of your future. Plus rebar. If there’s such a thing as neo-noir, this is it. Moody, smart, sexy, and tension-filled, Old Ghosts is a whip crack of a crime novella.” —Paul Tremblay, The Little Sleep and Swallowing a Donkey's Eye

"Korpon's Baltimore is not a particularly pretty place, but even in its darkest corners his characters' humanity always shines through." —Elizabeth A. White

“By the Nails of the Warpriest is the kind of book that’ll tear your heart out and leave you howling in the wilderness, and I mean that in the best possible way. It’s an eerie and wonderful novella.” —Ben Whitmer, Pike and Satan is Real: The Ballad of the Louvin Brothers

“Nik Korpon’s By the Nail of the Warpriest is dystopia with a capital D, and reads like some bastard hardboiled sci-fi lyric you can’t shake from your head. Don’t be fooled by the low page count, either. This is a novella that feels like a novel in the best possible way – it’s dense, atmospheric and literary. In short, you’d be batshit to miss out on this.” —Ray Banks, Beast of Burden and Inside Straight